Standing In The Way

There are lots of news reports, articles, and even books devoted to the deteriorating state of America and speculating on the likely outcome. Reading them has brought several things to my mind.
As an example, I remembered something Hal Lindsey said 20 years ago about the then current world situation. He said he had been wondering how God was going to fulfill end times prophecy while the Soviet Union was standing in the way of the revived Roman Empire taking its prophesied place in the end times.
The term “revived Roman Empire” comes from Daniel’s interpretation of Nebuchadnezzar’s dream as a prophecy of “Gentile Dominion”, the time during which Gentile Empires would rule the world. (Daniel 2:31-43) 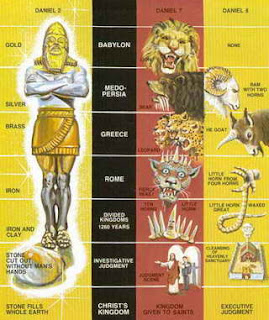 In the dream Nebuchadnezzar saw a large poly-metallic statue, and Daniel interpreted it to represent four Kingdoms. Many scholars believe the head of gold stood for Babylon, the chest and arms of silver symbolized Media Persia, who conquered Babylon. The belly and thighs of bronze pointed to Greece who defeated the Persians. The legs of iron represented Rome who replaced the Greeks.
Finally came the feet and toes, part of the legs and made partly of iron like the legs, but different in that they were also composed partly of baked clay. Daniel called them a divided kingdom, partly strong and partly weak (Daniel 2:41-42).
The Roman Empire was never completely conquered. Instead it split into eastern and western legs, versions of which have always been visible on the world scene. Since the feet and toes are the last phase of Gentile Dominion before the God of Heaven will set up a Kingdom of His own (Daniel 2:44) and since the statue only represents four kingdoms, scholars call them the revived Roman Empire.
How Will This Happen?
OK. Let’s go back to Hal’s question. Remember, before its fall in the early 1990s all of Eastern Europe including half of Germany was under Soviet control. This was a significant portion of the old Roman Empire. He wondered how the USSR would be defeated so the end times version of the Roman Empire could emerge. 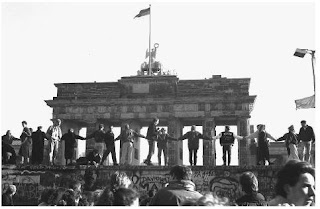 Then we all received the answer loud and clear when for all intents and purposes the Soviet Union suddenly ceased to exist. It wasn’t defeated by an external enemy, but crumbled from within under a crippling burden of debt. The debt was the result of a combination of problems, including a disastrous war in Afghanistan, an unsustainable arms race with the US, and the inability to support the resulting increase in government spending in a declining Soviet economy.
Remembering Hal’s comment made me think how similar the world situation is today, only now it’s the US standing in the way of end times prophecy. Israel can’t experience the utter abandonment that will leave God as its only hope against powerful, hate filled enemies until the US has been neutralized. Like the Soviet Union, we could crumble from within for the same reasons they did. A catastrophic natural disaster, a coordinated series of terrorist attacks, or the rapture of the Church would also get the US out of God’s way. But something will have to happen to clear the way for the next phase of the end times, because just as the USSR was not part of Nebuchadnezzar’s statue, neither is the USA.
We’re All In This Together 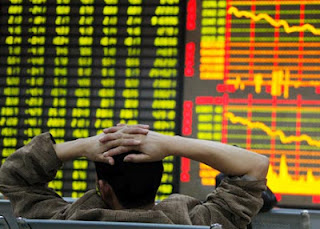 Another thing that struck me was the “inter-dependency” of the world today. For example, news reports abound on the extent to which Europe’s economic difficulties are hindering America’s recovery. And now we’re being told that China’s exports are dropping at an alarming rate due to the world wide lack of demand. China is the world’s number one exporter and currently new orders are not sufficient to sustain its massive manufacturing capacity.
Some experts are warning that China’s economy could be in the early stages of implosion. If so this could also carry worldwide implications. And China is one of America’s major creditors. How would the decline of their economy affect the US? Oil prices also fluctuate in response to changing worldwide demand. It seems like all the world’s economies depend to a growing extent on each other. These and other trends make me wonder how God would go about healing America without also healing the rest of the world.
In the days of Ruth and Boaz, escape from the famine in Bethlehem was as simple as walking across the Jordan River valley into Moab. And Nineveh was powerful during a time when nations could exist independently, and where God treated them individually.  Remember, He only had Jonah warn Nineveh of the coming judgment. No other city was warned because the judgment was against Nineveh alone. Even within the last century isolationism was considered to be a viable strategy for the US. But we now live in an age where nations are interdependent and where God is in the process of bringing judgment upon the whole world. It’s a whole different set of conditions.
Who Are You Looking For?
Then I realized how our view of the end times affects our view of current events. If you’re one of those scoffers who laugh when people talk about the end times and think that everything will go on as it has since the beginning of creation (2 Peter 3:3-4) then I can understand why you want to pray for God to protect your way of life. It’s the natural thing to do. In Matt. 24:37-41 Jesus spoke about the time just before His coming. In effect, He said even then people would be trying their best to live a normal life, thinking the terrible times would have to end sooner or later and things would go back to being the way they’ve always been. They will have no idea that the world as they know it is about to end.
But if you believe we’re the generation that will see the Lord’s return for His Church then you see the decline of the US as a major sign that God is bringing things to a close, just as the fall of the Soviet Union was a major sign 20 years ago, and the re-birth of Israel was a major sign before that. And although that means things could get even more uncomfortable soon, you long for the Lord’s appearing, since you know the Lord has promised to rescue us from the coming wrath (1 Thes. 1:10) and will award a crown to all who’ve been longing for Him to do so (2 Tim. 4:8). 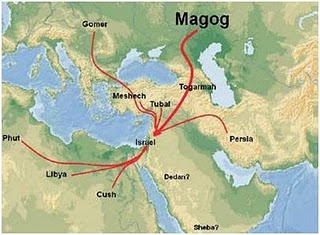 Personally, I believe the signs that show we’re well into the End times are becoming almost impossible to ignore. Israel is back in the land. The Middle East is a tinder box one spark away from erupting in flames, and all the participants in Psalm 83, Isaiah 17, and Ezekiel 38 are now in place. The weather is unpredictable and becoming more extreme. Natural disasters are on the rise.
The economic problems we face are worldwide in scope and require the kind of solutions only a one world government can implement and enforce. This means a leader will have to be found who can quickly gain worldwide popularity. The quote attributed to Paul Henri-Spaak, former Prime minister of Belgium, is becoming timelier by the hour. “What we want is a man of sufficient stature to hold the alliances of all people and to lift us out of the economic morass into which we are sinking. Send us such a man, and be he god or devil, we will receive him.”
Thy Kingdom Come
It doesn’t matter whether you favor the western leg of the Old Roman Empire or the eastern leg, they’re both in the advanced stages of preparation to become the last Gentile empire before the Lord comes to establish His Kingdom. This is an urgent sign because the revived Roman Empire will have a short duration, perhaps as little as 7 years, and then the Lord will come to establish a kingdom that will never be destroyed or given to another (Daniel 2:44).
As has been the case in the past, this kingdom will exist in three components, Jews, Gentiles and the Church. The main difference, at least at the outset, is that all will be believers. The Jews will dwell with God in Israel, which will be expanded to include all the land He originally gave to Abraham. Believing Gentiles who survive the Great Tribulation will repopulate the rest of Earth, and the Church will inhabit the New Jerusalem. 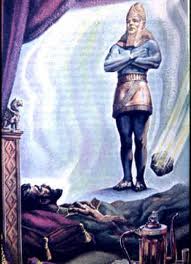 Most of what the Bible contains in relation to the Kingdom Age on Earth is found in the Old Testament and is limited to descriptions of Israel, which will be the headquarters of the Kingdom on Earth. From them we can see glimpses of a creation liberated from its bondage to decay (Romans 8:18-21), with fields so fertile the farmer can barely complete the harvest of one crop before it’s time to plant the next one (Amos 9:13), of people living in peace and joy to an age well beyond what man currently experiences (Isaiah 65:20), of children no longer doomed to misfortune playing safely in the streets while the elderly look on happily (Zech. 8:4-5).
We can only assume that life in the nations will also be a much improved version of what we currently experience, but it seems clear to me that Israel will be the most favored nation on Earth.
Life in the New Jerusalem is even more sparingly described. But what is there is mostly contained in Rev. 21. From there we can see obvious differences. There’s no mention of fields, crops, or other earthly endeavors because after the rapture the Church will consist of immortals of the royal class, and royals don’t work in the sense that you and I do.
1 John 3:2 says, “Dear friends, now we are children of God, and what we will be has not yet been made known. But we know that when he appears, we shall be like him, for we shall see him as he is.”
John’s statement means it’s impossible to know in any detail the kind of life we’ll be living after the rapture. All we know for sure is that it’s beyond our imagining. Paul said, “No eye has seen, no ear has heard, and no mind has conceived what God has prepared for those who love Him” (1 Cor. 2:9).
So if you’ve heard stories about us sitting on clouds playing harps all day, or having to endure an endless worship service, or looking with envy on another person’s mansion and wishing we’d worked harder in life, you know those things can’t be true. Those ideas were conceived by human minds, and are not supported in Scripture.
Just as you have the faith to believe you are saved, you also have the faith to believe your next life will surpass your current one to an extent you can’t imagine. You only have to step outside the boundaries of your earthly perspective to exercise it. 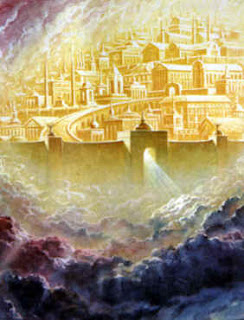 End Times prophecies tell us God is working to bring His Kingdom to pass. These prophecies say this will be accomplished in several steps. First He will remove His Church from Earth to the place He’s prepared for us (John 14:2-3). Then He will turn His attention to Israel for the seven remaining years He promised them (Daniel 9:24-27, Acts 15:13-18). During those seven years He will accomplish three things in preparation for the Kingdom. Through the End Times judgments, He will 1) completely destroy the nations among which His people have been scattered, 2) discipline Israel (Jeremiah 30:11), and 3) bring about the restoration of His creation (Acts 3:21, Rev. 21:1). Then the Lord Jesus, having established His Heavenly Kingdom in the New Jerusalem seven years earlier, will return to establish His Earthly Kingdom, headquartered in Israel.
This is God’s plan for us, and I believe the signs tell us He’s already well into the final stages of implementation. You can almost hear the footsteps of the Messiah.
Posted by One Gospel One Truth at 19:13