Economic crisis: What actuality is going on?

Global Governance is here and there is nothing you can do to stop it.
Quoting from http://theeconomiccollapseblog.com;

"Have you noticed that a really bad mood seems to have descended on world financial markets?  Fear and pessimism are everywhere.  The global economy never truly recovered from the financial crisis of 2008,...Does Geithner know something that we don't?  To say that what Americans are facing will be "harder than anything they've experienced in their lifetime now, for a long time to come" is very, very strong language.

Nouriel Roubini in an exclusive TNR interview[1], , professor of economics at NYU's Stern School and chairman of Roubini Global Economics, argues that the worst is yet to come for the global economy. He foresees many more job losses in the U.S. and social upheaval abroad.

Beyond the explanations from all national news media, what actuality is going on?  To find the answer, we may have to look from the Bible prophetic point of view.  I came across an expository in Daniel by Ray C Stedman[2] written in 1969.  He describe the fourth kingdom of the great dream image in the book of Daniel to be the last empire until the time when God sets up his own kingdom on earth; it is within the scope of this kingdom that he believe we still live.  I am amaze by how relevant it is for the present time.  The economic disorder seem to play an important part of bringing nations around the world to nationalize a good portion their banks by bailing them out in order to restore markets confident.

Sarkozy said the G8 meeting should produce "a new capitalism"[3].  He said the problem is international and therefore needs an international solution.  Barroso said, "We need a new global financial order"[4].  Could we be witnessing the making of the 10 toes of the statue dreamed by king Nebuchadnezzar?
It seems to me that we are heading toward global governance.
What is global governance?  According to James M. Boughton and Colin I. Bradford, Jr[5]

"The ideal of global governance is a process of cooperative leadership that brings together national governments, multilateral public agencies, and civil society to achieve commonly accepted goals.  It provides strategic direction and then marshals collective energies to address global challenges.  What is required is a transition to a global system of reformed institutions and new governance mechanisms that can harness diverse energies and resources in a cohesive way to respond effectively to urgent global challenges in the age of massive economic and social transformation that lies ahead".

God revealed to Daniel king Nebuchadnezzar’ dream. God describes the sequence of global governance that will take place through the Time of Gentile.  In Daniel 2:42, "And as the toes of the feet were partly of iron and partly of clay, so the kingdom shall be partly strong and partly fragile."
The global governance is describes as a mixer of iron and clay, which mean that the alliances between the nations that makeup the global governance although strong are kept together by democracy full of conditional treaties.  That final time of gentile is better known as The Revived Roman Empire, but actually it is much more than that. It is the Revived of All Past Existed Empire. 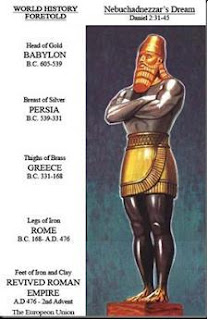 What you see in the picture is the traditional description of sequence of empires until now.  But what most student of bible prophecy disregards is that the toes support the legs, the legs support the thighs, the thighs support the breast, and the breast supports the head.  It is one body therefore global. The society today is as much Babylonian in costume, religious belief, and traditions as the Romans were.


In the expository in Daniel by Ray C Stedman, he explains Daniel's dream.  He wrote;

"What is the symbolism of this?  (The feet and toes partly of potter's clay and partly of iron)  The clay is obviously the opposite of iron.  Iron symbolized an imperialistic attitude or form of government, the power and might of imperialism seeking to dominate and to rule by brute force and strength.  Clay, on the other hand, is weak, pliable, easily molded.  Most Bible scholars are right in identifying this as the principle of democracy.

Perhaps that may cause us to bristle a bit.  We do not like to see democracy attacked.  We like to think that the reason the United States and Great Britain have become strong nations is because they are democracies; that it is the voice of the people that gives strength.  But if you look at history, especially the history of the West, in the light of the revelation of Scripture and in an honest evaluation of democracy, you will discover that democracy is not really a very good form of government.  The voice of the people is always a fickle voice.  It is easily molded, like clay.  That is what politicians capitalize on.  Every election year you can hear them shaping the clay, molding the clay into the opinions they want them to have.  Today we are subject to the tremendous pressures of mass media, which play, upon our minds to mold the will of the people.  That is the weakness of democracy."

"Democracy cannot exist as a permanent form of government.  It can only exist until the voters discover they can vote themselves largesse out of the public treasure.  From that moment on, the majority always votes for the candidate promising the most benefit from the public treasury, with the result that democracy always collapses over a loose fiscal policy, always to be followed by a dictatorship, and then a monarchy."


Feet mix of iron and clay.  All western nations (an extension of the Roman empire) combining their effort to save the world economy and the environment might bring the fulfilment of this prophetic dream.  The cause for global warming is over rate.  Could it be a guise for global governance?  Now German scientists are predicting a 10 years colder temperature[7].

"If global cooling over the next few decades is consistent with model predictions, then so too is pretty much anything and everything under the sun.  This means that from a practical standpoint climate models are of no practical use beyond providing some intellectual authority in the promotional battle over global climate policy."


Now, it is hard to believe that so many environmentalists are so gullible in listening to Mr Al Gore who plays a good part for global governance.

Since 1995, Mikhail Gorbachev and Maurice Strong have co-chaired a global process with the purpose of implementing the Earth Charter on a global scale and ushering in the one world religion.  Under the cloak of an environmental crisis and impending doom, they hope to gain wide acceptance of the Earth Charter, which contains much more than a new environmental policy.  How many times lately have you heard the terms "global community", "globalization", "world economy", "sustainable development" or "interdependent world"?  These are all phrases that appear throughout the Earth Charter along with other New Age terms such as "circles of compassion", "triangles of meditation", "reverence for Earth and Cosmos", and "Mother Earth".


Eighteen month from now, it may well be a very different world, consisting of ten Kingdoms (ten toes).

Is Canada part of this objective?  The Right Hon. Steven Harper said,

"We need new infrastructure", explaining that the world doesn't have the mechanisms needed to cope with the current financial crisis. [9].  What policies those the leaders of the oppositions have?  Do they have a mandate to relinquish our economic sovereignty?


In conclusion, what are we to do?  For Christians, Seek ye first the Kingdom of God, meaning, "Draw Near To God, and He will draw near to you".  For non-Christians take this as a witness of things to come.  "Go ye preach the gospel of the Kingdom of God to all nations as a witness".  This instruction was not intend to convert the entire world, it was intent to instruct all nations that the King of kings is coming back to claim His dominion.  This was quite different from the "Gospel of Salvation" which is "everlasting life for those who believe in the one that God has sent - Jesus". That is what Christmas reminds us.  God is working out His purpose.

As were the days of Noah, so will be the coming of the Son of man.

May God bless the people of Newfoundland and Labrador for they "Seek the Kingdom of God".
I invite you to listen to this MP3 from Brannon Howse Title "Bank for International Settlements".

[5] James Boughton is IMF Historian and Assistant Director of the Policy Development and Review Department. Colin Bradford, Jr., is Nonresident Senior Fellow for Global Economy and Development at the Brookings Institution.